You know it’s going to be a complicated episode when you have to research the meaning of the title before you even press play. Virtu e Fortuna is a Machiavellian reference roughly meaning Virtue and Fortune. Essentially, being ruthless and a good leader versus Fortune, or uncontrolled circumstances.  (comicbook.com has a great essay on it here)

So once we’ve deciphered the clues of the title, it’s time to get to the episode.  Make no mistake, this isn’t as exciting as the first two episodes of the season. But we do gain some deeper insight into our fave characters.

But first, let’s talk about all the worlds of the Delos empire.  We know there are at least six, and now we’ve seen three of them.  Obviously there’s Westworld, which appears to be the center of the Host Rebellion.  We’ve seen hosts in production from Samurai World, but in this episode, Maeve and friends, including Sizemore as our timidly intrepid head of narrative, get lost and stumble into the realm of the Samurais.

But the episode opens in a third world, colonial India. Its actual name wasn’t revealed, so we’ll call it Safari World for now, since it appears guests go on big game hunts.  But this time the big game hunts the guests.  One of the guests is chased by a bengal tiger, runs, and goes over a cliff with the beast into a mega lake.  She eventually washes up on the edge of Westworld and we can presume that’s the same tiger we saw briefly in episode one.

It’s not like Westworld (the park) doesn’t offer us enough excitement and stories, but we really can’t wait to see how all these narratives are going to coalesce thanks to the late Dr. Ford’s machinations.

The quest for the host currently known as Peter Abernathy continues.  We were wondering why he was the key Delos needed to recover from inside the park and tonight we got a clue. He somehow ended up at the same fort where Dolores and Bernard were holed up. Dolores’ reunion was heartbreaking. For even though she knows she was made, Dolores still tries to reconnect with a host she considers her ‘father.’

But Peter’s circuitry and programming are so screwed up, he doesn’t know where he is and barely recognizes her.  It had tones of a child trying to breakthrough to a parent with Alzheimers.  So Dolores enlists Bernard to try and fix his narrative, and it’s then that we find out this thin personality is masking a huge file. Bernard sees what it is, but doesn’t tell us. Dude!

Peter eventually gets captured, but given the timeline jumping, his fate is still unknown.

Dolores has learned to make alliances of convenience and to quickly break them when they no longer suit her needs.  This was in full effect when she joins forces with the captain of a fort. She uses them to hold off the Delos security, but then locks them out of the fort, and shoots them through the door.  A few of the survivors are sent off for execution and she hands Teddy a gun and tells him to do the deed. He doesn’t have it in him, and Dolores sees him free the group.

She’s not happy (but is she ever?!?) and I have a feeling this will come back to haunt their relationship.

There are also budding relationship issues with Maeve and Hector. Turns out Sizemore based Hector and Isabella’s relationship off him and his ex.  So Hector trashed Isabella for being just a program and declared his love for Maeve saying “when I awoke where you play God I realized Isabella was a lie.”  But he was still parroting the words he was given long ago.  Given Maeve’s fight against her program of being a loner, this will not help her love life in episodes to come.

So far, it seems like a very few select hosts are fully ‘awake.’ Dolores, Maeve, perhaps the bengal tiger from Safari World. But he’s dead so we’ll never know.

But the most poignant moment came when Dolores and Bernard are reunited. She says to him “it’s been some time since we talked just you and I. The man you’re based on, I wonder if there’s any of him in you.”

Bernard lives his mission and states that he’s meant to serve. But it makes you wonder if he is a Manchurian candidate, which side will get his loyalty. Or maybe it’ll go to Manchurian World, aka Park Five!

This episode didn’t feature older William, aka The Man In Black. However the trailer at the end featured him almost exclusively. So we have a feeling he’ll be a central figure next week.

But that’s part of the (rare) problem with Westworld. There are so many compelling storylines and characters, there’s not enough time to feature all of them in every episode. Last week had a serious Maeve deficiency. This week William was wandering around the park somewhere. Plus they’re all existing on different timelines.

This is a TV version of 3-D chess. It’s hard to follow but worth the effort.

Is it just us, or is Dolores’ dialogue (and the jibberish of papa Peter) taking on a Shakespearian feel, almost in the vein of Deadwood from back in the day? Her dialogue is getting ominously poetic. And when an addled Peter is saying things like “what is the use of a violent kind of delightfulness if there is no pleasure,” you have to wonder where this is going.  Yes, that’s a line from Gertrude Stein, but the feel is there. 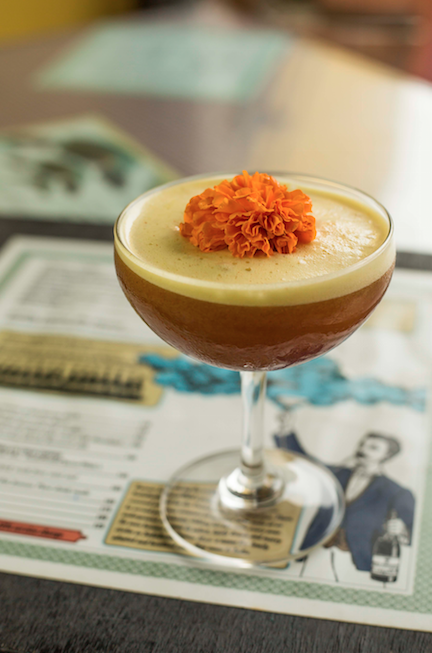 The Mumma Nu Double Dose.  A classic Indian cocktail in honor of Safari World. It’s a whisky based drink with syrup and an egg. Cuz if you’re gonna get mauled by a rebellious bengal tiger, you might as well have a fresh cocktail in you to ease the pain.

This is a text widget, which allows you to add text or HTML to your sidebar. You can use them to display text, links, images, HTML, or a combination of these. Edit them in the Widget section of the Customizer.
Loading Comments...
Comment
×
%d bloggers like this: